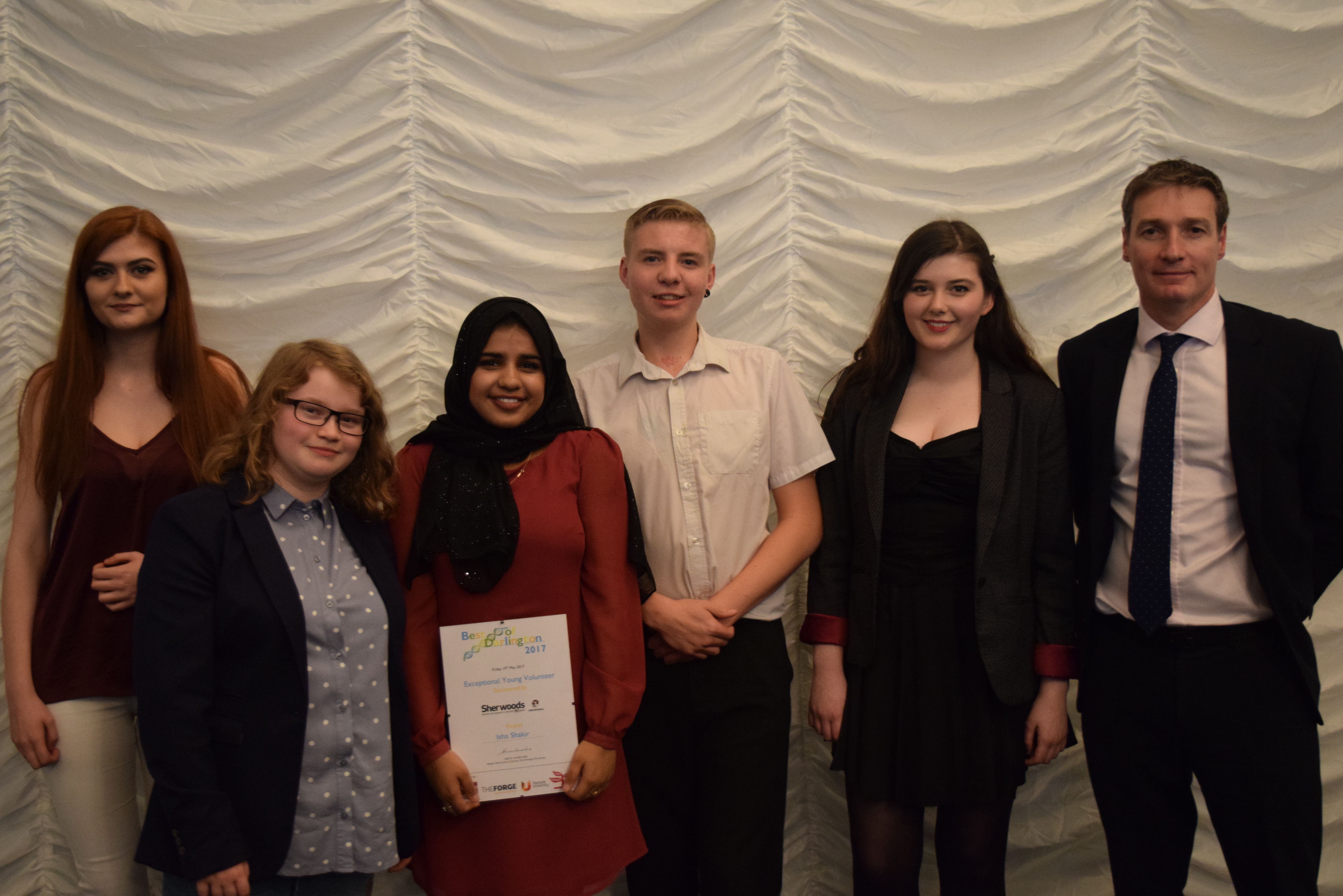 QE students and staff have been honoured at the annual Best of Darlington Awards for their outstanding achievements in the past year. The ceremony, hosted in the town’s Dolphin Centre, was a glitzy evening with entertainment and an array of awards to celebrate the work of a wide range of individuals, community groups and businesses. The town’s MP, Mayor and other dignitaries were in attendance to hear about the success of QE’s students and staff, and the evening was thoroughly enjoyed by the winners and shortlisted nominees and their guests.

Alycia Leach won the “Exceptional Student” category. Alycia, who has struggled with spinal problems and missed most of Year 10 due to extensive appointments at Great Ormond Street Hospital, gained excellent AS results in her first year of QE and has won a place to read History at Cambridge University. She has shown great courage and determination, and is a very worthy winner.

The other shortlisted students in this category were also from QE. Owen Dickinson has remained positive and enthusiastic about his studies and College life in spite of having several operations due to having a genetic condition; Kallman’s syndrome. Ebony Chaplin has managed her mental health issues including anxiety and panic attacks in order to remain successful at QE. Both Owen and Ebony thoroughly deserve to have their achievements recognised in this way.

James Crossley was an extremely deserving winner of the “Academic Excellence” award. James left QE in the summer of 2016 having gained 3 A* grades in A level Maths, Further Maths and Physics and a grade A in A level Geography. James progressed to Cambridge University to study for a degree in Engineering. Rogan Clark, another ex QE student, was also shortlisted in this category. Rogan gained 4 A* grades at A level in Chemistry, Further Maths, Maths and Physics and is currently studying Physics at Oxford University.

Mel Stand was announced as the winner of the “Exceptional Care” category. At QE, Mel runs the REACT Club where students are able to discuss and act upon important issues such as being involved in Amnesty International’s letter writing campaign to people who are falsely imprisoned. Mel also works for Darlington Area Church Youth Ministry and organises a drop in session for QE students.

Isha Shakir and Karis Charley were both shortlisted in the “Exceptional Young Volunteer” category. Isha has worked for the Citizen Advice Bureau, runs a religious hatred awareness campaign in Bishop Auckland and has given talks and organised workshops in primary and secondary schools. Karis has worked with the charity Fixers to produce and distribute a booklet which educates people about epilepsy. Both students are incredible young people who have had a positive impact on the lives of many others.

In the “Performance in Sport” category, Hannah Featherstone was shortlisted for being one of the best swimmers in the country. She has represented Team GB at the highest level and has won many medals including 2 silver and 2 bronze at the Baku European Games.

Laurence Job, Vice Principal, comments “QE students and staff have once again shone at the Best of Darlington Awards. They all thoroughly deserve to have their achievements recognised in the town and everyone at QE is incredibly proud of them.”