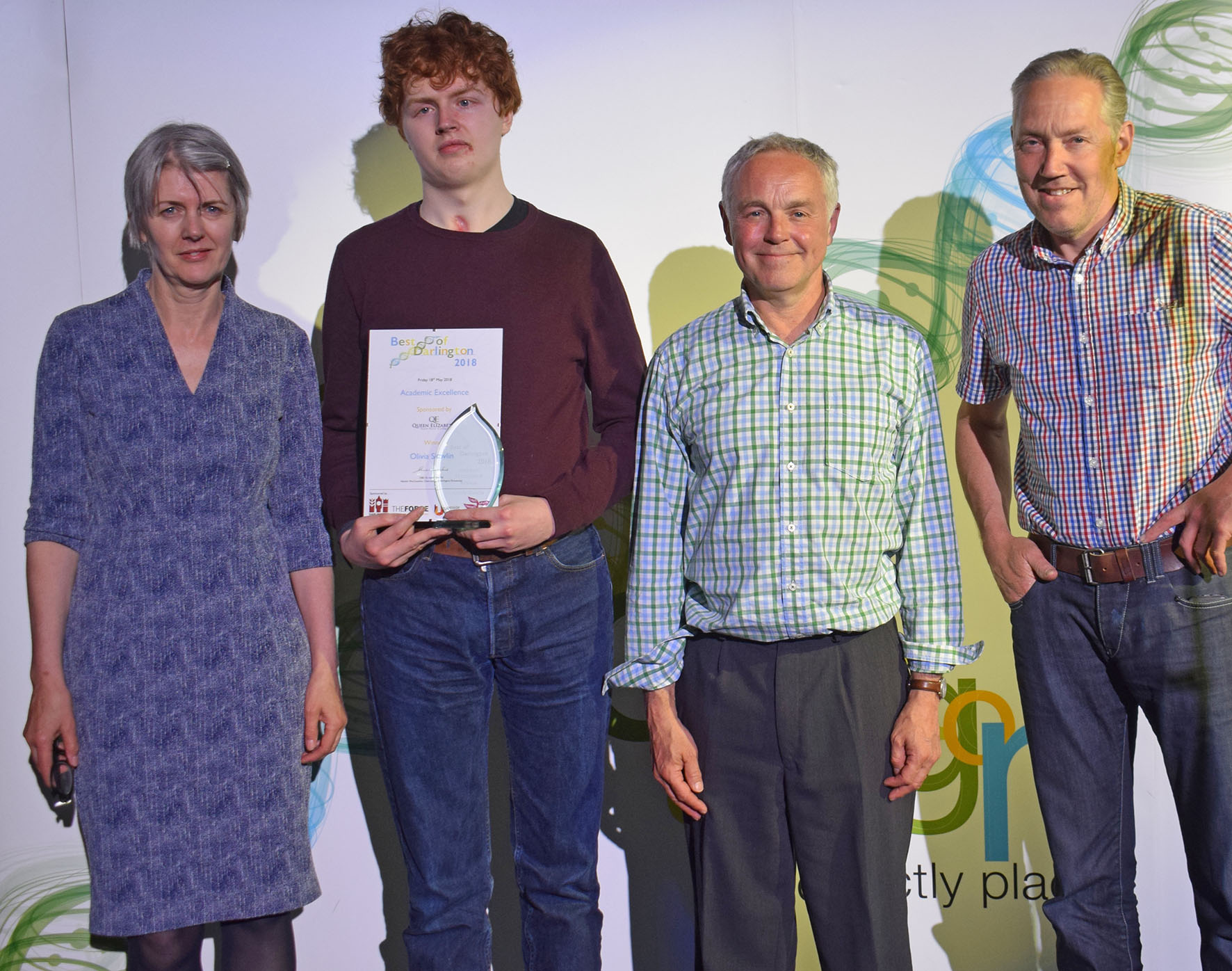 Students from QE have been honoured at the annual Best of Darlington Awards ceremony which celebrates inspirational individuals and those who have made an exceptional contribution to the local community. All three shortlisted nominees in the Academic Excellence category were QE students with Olivia Shovlin winning the award for her outstanding A Level results in 2017. She achieved A*/A grades in Biology, History, Chemistry, Extended Project and AS English Literature, and now reads Biological Sciences at Oxford University. However, what makes her success even more remarkable is that she was able to achieve such wonderful results despite some extremely difficult personal issues. During her studies, Olivia’s twin brother, Joe, was hospitalised following a traumatic brain injury spending six months in hospital with Olivia visiting him daily whilst remaining fully committed to her A Levels. Fortunately, Joe is now making a fantastic recovery and was able to accept Olivia’s award on her behalf at the ceremony, as she was unable to attend.

Also nominated in the Academic Excellence category were Harry Iveson and Lauren Kenworthy. Harry obtained four A* grades in A Level Chemistry, Maths, Further Maths and Physics, securing her a place at Bristol University to study Maths, while Lauren Kenworthy achieved all A to C grades at the same time as supporting her critically ill mother and copying with a close family bereavement. She now has an unconditional place at university and continues to make her parents proud.

Mary King was shortlisted in the Exceptional Student category for her courage and determination against extreme adversity. Nominated by both her Progress Tutor and Principal Tutor, Mary is described as an individual who will not allow her past to define her and who will work with grit and determination to fulfil her aspirations. Through hard work and perseverance, she has comfortably secured offers from five universities to read Law.

In the Young Person’s Contribution to the Community category, the College was delighted to have two shortlisted finalists, Danny Brown and Mille Tezcan-Fotoohi. Danny is a member of the UK’s Youth Parliament and is the Director of the Tees Valley Youth Collective, encouraging youth participation and engagement in politics across five local authorities, an area which covers 67,000 young people. Furthermore, he is President of QESFC’s ‘Interact Club’, part of Rotary International, an organisation which seeks to strengthen relationships within the local community and challenge young people to reach their full potential. Mille, also a member of the UK’s Youth Parliament, has campaigned tirelessly on a number of issues including raising awareness of mental health issues and reducing the waiting times for appointments with CAMHS. She has recently been involved in the national campaign to reduce the voting age to 16.

Reflecting on another successful year for QESFC students at the Best of Darlington Awards Tim Fisher comments: ‘It is wonderful to see so many of our students recognised and honoured for their hard work and efforts, both in and outside of College. We are incredibly proud of everybody who was nominated and of Olivia, who thoroughly deserves her award. We are certain that all of the nominees have bright futures ahead of them and wish them every success’.