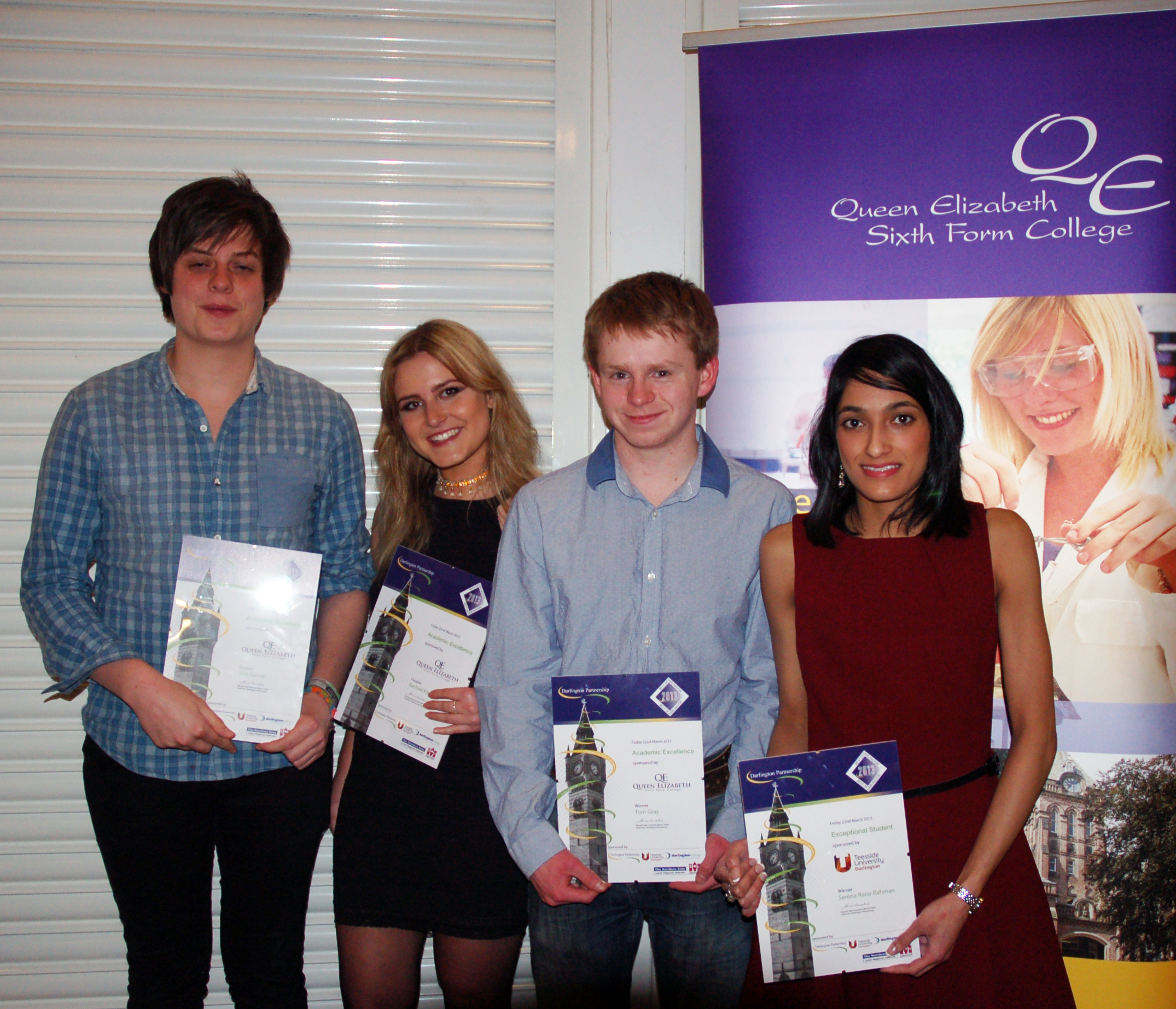 At the very prestigious Best of Darlington Awards ceremony, a number of QE students and staff were deservedly honoured for their contributions to the College and the wider community.

In the Young Person’s Contribution to the Community category, James Charlton was shortlisted for his outstanding efforts to assist with the rescue and rebirth of Darlington Football Club. James has actively engaged himself in fundraising activities as far away as Barrow in Furness, is a regular match day steward and volunteers in the Club’s town centre retail outlet.

Dave Scott won the Contribution to Sport Award. As well as working at QE with sports teams, Dave coaches at Darlington Spraire Lads and Lasses Football Club which he set up over 30 years ago. In addition, he works as a coach for Darlington Sports Development and delivers football sessions in local schools.

All three shortlisted nominees in the Academic Excellence category were students from QE. Tom Gray won the award for his outstanding set of A Level results in 2012. He achieved a staggering 6 A* grades in Chemistry, Further Mathematics, Mathematics, Physics, Extended Project and Critical Thinking. In addition, Tom achieved full marks in 6 of his modules in Maths and Further Maths, 2 of his Physics modules, a Chemistry module and a Critical Thinking module. Tom is currently studying Natural Sciences at Cambridge University and was an extremely deserving winner of this award. Jack Barron was also shortlisted in this category for his excellent A Level results last year. He gained A* grades in English Literature, Extended Project,  Politics, Philosophy and also secured top grades in AS Level Critical Thinking. Even more impressively, he achieved full marks in 3 of his 4 English Literature modules and in 1 of his Politics modules. Jack is currently studying English at Cambridge University. Rachael Kitching was the third QE student shortlisted for the Academic Excellence Award. Last summer, she gained fantastic A Level results – A* grades in Psychology, Law and Extended Project and A in Biology. But, there was more to celebrate as she gained the highest marks in the whole country for A Level Psychology – an absolutely outstanding achievement. In her A Level Psychology exams, Rachael was awarded a total of 398 marks out of 400 and scored full marks in 3 of her modules. In recognition of this she has won prizes from the Exam Board and the British Psychological Society. In Law, Rachael also gained full marks in 2 of her modules and her excellent results have taken her to Newcastle University to read Law. She hopes eventually to become a solicitor.

The Exceptional Student Award was won by Serena Rana-Rahman who left QE in 2012. Serena is a truly inspirational student. Whilst acting as a carer for her mother, Serena maintained an excellent academic record and helped other students and the College through her voluntary work. In her A Level results, she achieved 3 A* grades in English Language, English Literature and Psychology. These results included achieving full marks in 1 of her English Literature and English Language modules, and in 3 of her Psychology modules. Her overall result in Psychology (395 out of 400 marks) resulted in her scoring the third highest mark for the subject in the country. Serena is now studying English at Teesside University to study English and is a truly wonderful young person.

“The Best of Darlington Awards yet again illustrate the wonderful and inspiring work and achievements of people in the town. At QE, we are extremely proud of the members of our College who were honoured by winning or being shortlisted in their categories, and we look forward to hearing about their future successes.”