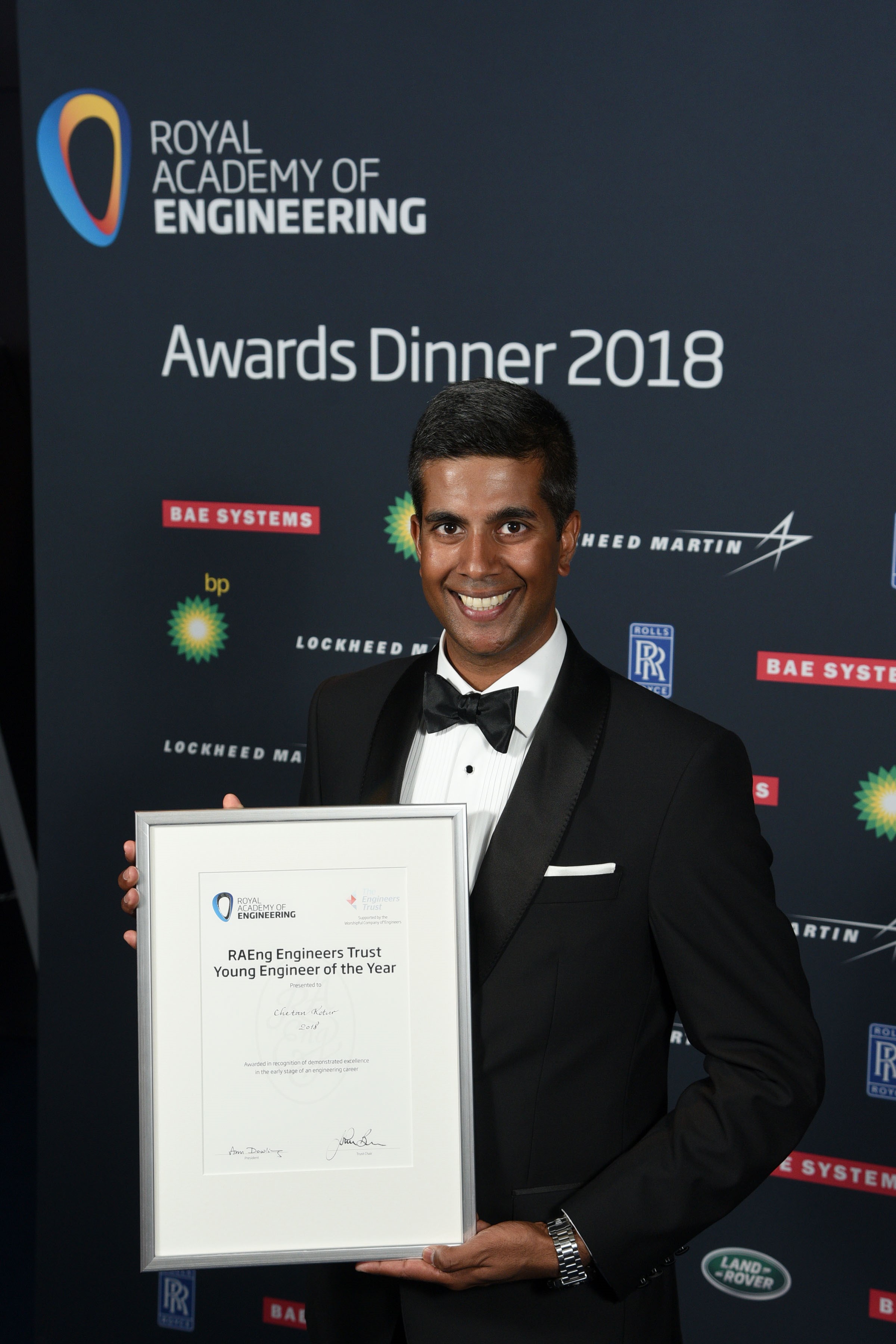 Chetan Kotur, an ex A level student at QE is celebrating after being awarded a prestigious accolade by the Royal Academy of Engineering.

Chetan was one of five young engineers from across the country who were judged to have had an outstanding impact in their respective fields early in their careers. He received his award, which included £3,000, at the Royal Academy of Engineering Awards Dinner. As the UK’s national academy for engineering, the Royal Academy brings together to most successful and talented engineers for a shared purpose: to advance and promote excellence in engineering. It has three strategic challenges:

Chetan is currently working at the forefront of the automotive industry as the CEO’s Assistant at Polestar, a Volvo electric car startup that he helped launch at the end of 2017 in Shanghai. Following his passion for cars, Chetan uniquely combines creative flair, design skills and deep engineering understanding. He is rapidly emerging as a bright, dynamic and driven future leader in the automotive industry.

At age 16, Chetan faced a career dilemma, between following his family’s tradition of studying medicine or pursuing his interest in designing cars. After being selected for the Channel 4 documentary ”Vocation, Vocation, Vocation” he chose to follow his passion for cars. He excelled academically, achieving top A level grades in Chemistry, Maths, Physics and General Studies whilst at Queen Elizabeth Sixth Form College in Darlington. In the next stage of his education, he gained a first-class degree in Automotive Engineering from Loughborough University. Having secured a place on the Volvo Cars Global Graduate Programme, Chetan progressed quickly as a Studio Engineer designing new cars. He has led the design of autonomous vehicle projects for Volvo and worked on the development of the company’s first autonomous steering and braking safety system. He also presented Volvo’s future technology strategy to Swedish Governmental Authorities – ensuring funding for cross-industry technology development.

Chetan promotes STEM activities in the North East to help inspire the next generation of engineers. He founded the ”Future Engineers Scheme” at Queen Elizabeth Sixth Form College, which over the last five years has given over 200 students a headstart in engineering. He was also awarded an Engineering Leadership Advanced Award from the Royal Academy of Engineering, allowing him to travel the world developing leadership skills. Five years on, Chetan continues to support and mentor a boy he met in a Rio de Janeiro favela who dreams of becoming a car designer.

Chetan comments: “It is extremely humbling and such an honour to receive The Young Engineer of the Year 2018 award from the Royal Academy of Engineering. Working as an engineer, you really have an incredible opportunity and responsibility to improve the society and world around you – something I find both fun and rewarding.

From realising my childhood dreams of designing new cars to now being part of launching a new electric car company, I am really grateful for all the support I’ve received and hope to continue pushing the global automotive industry forward towards an exciting future.”

Laurence Job, Vice Principal at QE, adds “It is wonderful to hear about the successes of our former students. We are all extremely proud of Chetan’s achievements and it is fantastic that his talent has been recognized by such a prestigious organization. We are grateful for the ways in which Chetan continues to support our students who aspire to become Engineers.”