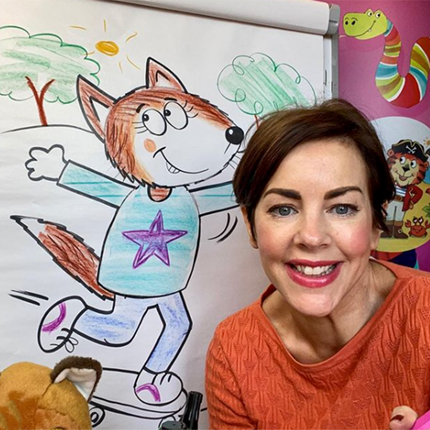 We recently caught up with former QE student Liz Million and found out how she was using her time during lockdown to good effect.

After developing her art skills at Abbey Primary School, Hummersknott Secondary and Queen Elizabeth Sixth Form College, Darlington Liz Million moved to London to complete her degree at Kingston University.  A book deal followed which has led to a successful career as both an author and illustrator.

More recently Liz has been utilising her skills as an artist and presenter to share her love of art with children by streaming online art sessions into their homes during lockdown.  Every Friday, at 10am, she can be found on her Facebook page, inspiring kids to draw by starting with basic shapes. In the first week, oval potatoes were transformed into funny aliens. Follow-up themes have included carrots becoming sharks, birds, fish and mice.

“I want to get more children drawing because it breaks down barriers,” she says. “It’s a really hard time for families, so I want to make kids happy.”  The free Facebook workshops every Friday are open to everyone, Liz sees it as a way of “putting something back” and encouraging people to “just have a go”.  The workshops have proved to be extremely popular attracting schoolchildren from across the globe, including Australia, Malaysia, and Spain, as well as the UK. “The feedback’s been lovely – I’ve been sent stacks of amazing pictures by children,” she says.