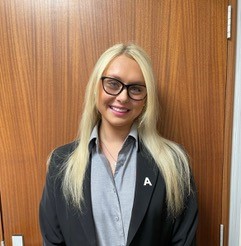 Emma Beauchamp, a former student of QE, has been awarded a British Empire Medal in the Queen’s New Year’s Honours list for her services to apprenticeships and skills. During her time at QE, Emma secured A Levels in English Language, Health and Social Care and Psychology before becoming a commercial apprentice at Gestamp and completing a chartered management degree apprenticeship with Teesside University. After having achieved first-class honours in her degree, Emma worked as a trainee account engineer with Global Sales and is now a technical sales engineer with Northumbria Optical Coatings which is about to hire its first business administration apprentice. In her free time, Emma is Chair of the North East Young Apprenticeship Ambassador Network and also recently became the Co-Vice Chair for the national organisation.

Reflecting on having been awarded a British Empire Medal, Emma comments: ‘I feel incredibly proud to receive a British Empire Medal for services to apprenticeships and skills as my volunteering is one of the most rewarding things I do. I believe that if you have the capability to do so, it’s really important to use what you know to give back and to provide others with the opportunity to further themselves, which is what apprenticeships can help with. I’m very proud of the network I’m part of because I know how much of an impact we can have on people’s lives, especially young people and those who are trying to get back on track following the pandemic. I’m very grateful to QE for opening my eyes to the world of degree apprenticeships as I wouldn’t be in the career nor volunteering position I am now without the support and guidance I received’.

Tim Fisher, Principal of QE, adds: ‘This is a tremendous achievement and we are extremely proud of Emma’s success.’