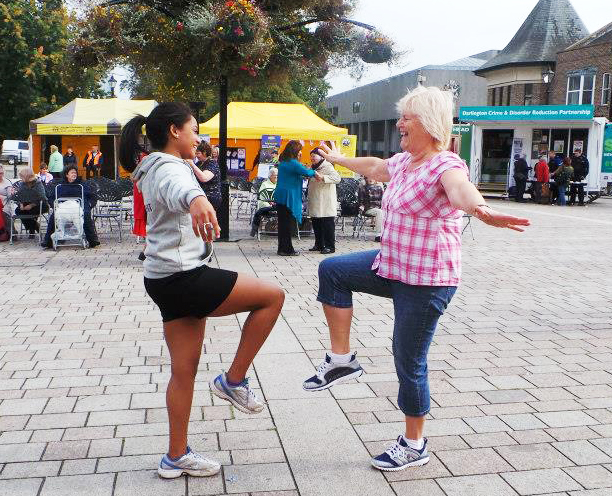 The theme for the day was “Intergeneration” and the event was jointly organised by Darlington Borough Council, Age UK Darlington, GOLD and the NHS. It was designed to showcase the achievements and aspirations of older people and the younger generation in Darlington; epitomised by the day’s slogan “Full of Life”.  QE students were delighted to be a part of the event, and enjoyed celebrating the day with members of the public.

Members of the Student Association Executive joined in a 1940s style Tea Dance in the Dolphin Centre and were thrilled to learn many new dances. They also listened to presentations about the Good Friends initiative being established across Darlington that aims to encourage people to commit just a few minutes a day or week to improve the life of a neighbour. Tom Johnston, President of the SA Executive, signed a pledge to support the scheme on behalf of QE.

In the market square, members of QE’s Sports Management Team led an exercise routine which was very popular and well-received. The routine, consisting of exercises to help with posture, balance and suppleness, involved the students and older members of the community working together and supporting one another. Everyone really enjoyed themselves and got a lot out of the session. The students’ hard-work in putting the routine together was deservedly recognised with an impromptu round of applause at the end!

QE’s Art Students led visitors to the Crown Street Library in the “Big Draw”; an event designed to encourage everyone to have a go at expressing themselves through Art. Again, the students were delighted to be involved in supporting this project.

“We were delighted to support the aims of Older People’s Day and to celebrate the contributions made by older people to our community. It was great to see so many of QE’s students sharing very enjoyable experiences with the people who attended the various events.”