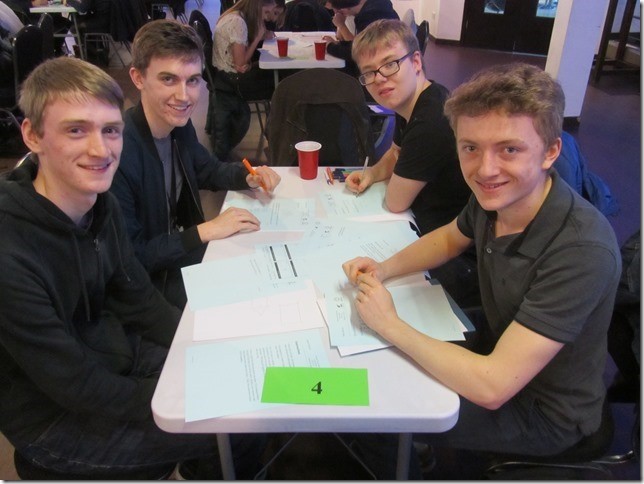 A team of four A Level Maths students from QE, are celebrating after reaching the final of the United Kingdom Mathematics Trust (UKMT) Senior Team Challenge, following a victory in the regional final at Teesside University. The team, consisting of Andrew Brown, James Morgan, James Terrill and Richard Kirkham, competed against 15 other regional schools and sixth form colleges in three rounds to determine who would travel to London in February to participate in the national final. The first round saw the students work in a group of four to try and solve as many questions as possible in the time allotted. In the second round, the team was divided into pairs and asked to complete a crossnumber, similar to a crossword but with numbers. One pair was provided with the across clues while the other had the down clues, and they were tasked with completing the crossnumber without communicating with the other pair. The final challenge, entitled ‘Shuttle’, placed the group into pairs again and the answer to each question was dependent on the previous answer. Coming joint first, QESFC have now qualified for the grand final which will see all of the regional winners compete for the title of national champions.

James Terrill, the captain of QESFC’s team, comments: ‘I was incredibly proud of our team, not only in our ability to work at our best under immense pressure on the day, but also at how we improved throughout our training in the weeks before the competition. I was also really impressed not just with those on the winning team, but by the enthusiasm and hard work of all of the first year Further Maths students who took part in the training and selection process’. Laurie March, teacher of Maths who accompanied the students to the regional final, concludes: ‘The students were very calm and had fun, whilst also treating the competition seriously and competitively. They made an excellent impression on the teacher marking their work, who was very complimentary about them. We’re all looking forward to the final in London”.