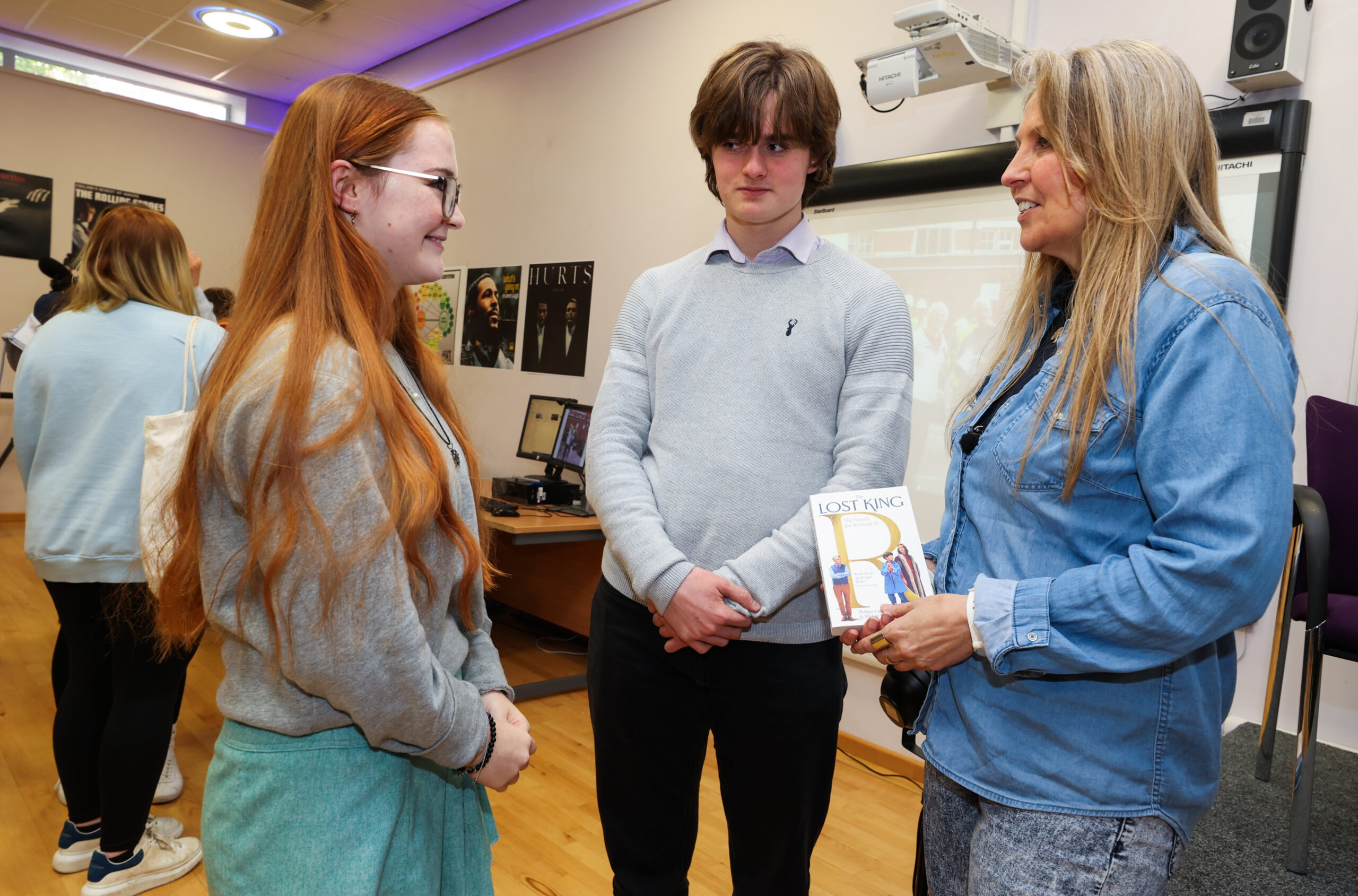 Writer and amateur historian Philippa Langley MBE captivated her audience at QE on Friday 14th October as she regaled students with tales of her search and discovery of King Richard III. A former QE student in the 1970s, Philippa made a nostalgic return to the college to talk to history, media studies and film students about the remarkable role she played in finding the remains of King Richard beneath a council-run car park in Leicester in 2012.

Her visit to the college was timely. The fascinating story is the subject of a new Steve Coogan film, The Lost King, released just last week, in which Philippa is played by Sally Hawkins. Talking to a room of around 70 students, she explained her fascination with King Richard: “People had an impression that he was a monstrous, murderous man – the Shakesperean Richard III – but the historical Richard III was loyal, brave, devout and just. I admired what he did in his lifetime – he fought for justice for the ordinary people, he fought for rights that we still have today.”

Philippa, who studied English Literature and Sociology at QE, shared details of her extensive research into the King, her ‘intuitive feeling’ that he was buried in the Northern end of a council-run car park, and the subsequent archaeological dig.  Describing the moment his remains were found, she said: “It was overwhelming – it’d taken 8 years and he was found in the exact place I said he would be. It was as though all the air had been sucked out.” Referring to her current work with the Missing Princes Project, Philippa also alluded to a big announcement next year regarding the assumed murder of the Princes in the Tower – King Edward V and Richard of Shrewsbury, Duke of York. She said: “The fate of the Princes in the Tower is the last big question left hanging over King Richard III. By the time we make our exciting announcement, which will undoubtedly change history again, I think we will have all the answers.” Closing her talk, Philippa was happy to share her advice with students: “Get really good careers advice, find someone who listens to you. If you can – do something you love. Every day of your life you will have joy and excitement. It will feel like you’ve never worked a day in your life!”

Students were given the opportunity to ask Philippa questions about her work and the film. History student Emma, 17, from Eaglescliffe, who is fascinated by the Tudors, was among the packed audience. She said: “I jumped at the chance to come to the talk. I’ve only been at QE for a few weeks, but I’ve noticed that there’s always loads going on.”

Philippa added: “It has been such a happy day at Queen Elizabeth and I so enjoyed meeting all of the students, whose questions were really in depth and insightful. It is really exciting to see what they will do in the future; the generation currently growing up holds so much promise – they are going to change everything.”