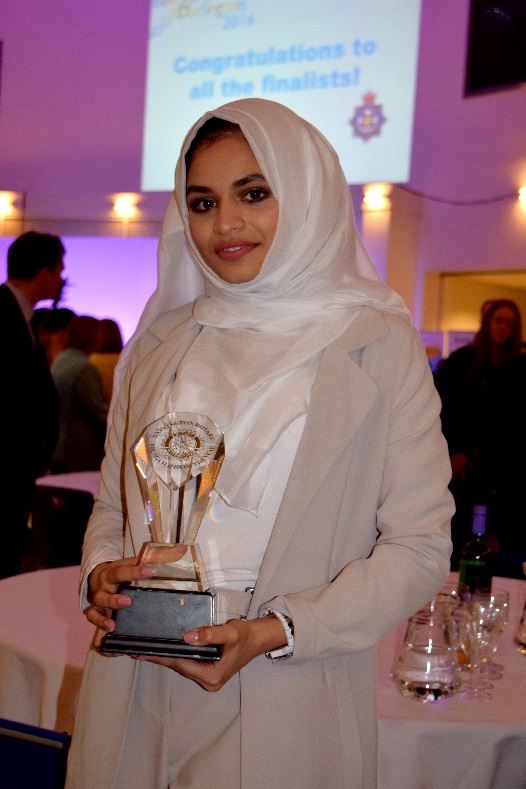 QE was well represented at this year’s Best of Darlington Awards with several students and ex-students being nominated for their contributions to the College and the wider community.

The Young Person’s Contribution to the Community Award was won by Sharifah Rahman, an exceptional young woman who is making a real difference in the community by challenging prejudices, stereotypes and misconceptions. Sharifah’s work has involved running education sessions at a local school; meetings with Darlington MP Jenny Chapman, the Durham Constabulary and PCC Ron Hogg, plus speaking out about hate crimes on BBC Radio Tees. Sharifah was prompted into action when a member of her own family who was wearing a headscarf was abused in a local supermarket. She is a remarkable young woman and an inspiration to others. Sharifah’s contribution and commitment was further recognised when she was also awarded the Young Citizen of the Year award.

Ex-QE student Callum Blades was presented with the Contribution to Sport award for his outstanding voluntary work. Callum has regularly volunteered as a coach at Middleton Rangers FC since October 2011 and acts as a mentor to other young people who wish to be coaches. Callum also coaches voluntarily at Evolution Martial Arts where he runs classes for children up to the age of sixteen, including the ‘Little Ninjas’ class for 3-5 year olds. Callum has continued his volunteering at university, where he coaches the university’s boxing teams and runs strength and conditioning classes for the rugby and football teams. Never one to stand still, Callum’s volunteering is going global when he will travel to Ecuador and the Amazon Rainforest in the summer in order to work on constructing an orphanage.

Two of the three shortlisted nominees for Academic Excellence were students at QE. Alex Harris achieved stunning exam results in his A Levels gaining A* grades in all 5 of his subjects, making him one of the most qualified young people in the country. In addition to his commitment to his academic studies, Alex has also completed a great deal of voluntary work including at a primary school; at a hospice; with Barnardos; founding a music project and organising a Coast to Coast ride. Alex progressed from QE to the University of Nottingham to study Medicine; a prestigious and highly competitive course with a very rigorous selection procedure.

Jasmin Abbot, winner of the award for Academic Excellence, came to College with outstanding GCSE results (11 A*s and one A, and the A was in Additional Maths which does not have an A* grade) and continued her incredible results in her first year by achieving 5 As and a B at AS level. Whilst at College, she spent time volunteering at a care home, at a hospital in Tanzania and for the British Red Cross, and organised a trip out to South Africa to spend time at an animal rehab centre.  Jasmin also secured a place at Trinity Hall College, Cambridge in Medicine – one of the most prestigious and competitive medicine courses in the country.

Current students Jonathan Raiseborough and Jordan Walton were both nominated in the Exceptional Student category. Jonathan has been on an incredible journey since joining QE, after being diagnosed with OCD during his time at secondary school. During his first year, Jonathan undertook some pioneering treatment for his condition that was only available outside London and successfully balanced this with his studies. At QE, Jonathan follows a demanding programme of study and still found time to illustrate a children’s book for a friend of the family, the proceeds of which will go to the National Autism Society. Jonathan is a very talented artist and hopes to pursue a career as an illustrator in the future. Jordan Walton is also an exceptional young man who is a young carer for both of his parents. Despite his out of college commitments, Jonathan retains an excellent profile of attendance often reaching a full 100% in any half term. He consistently meets and even exceeds target grades and remains unwavering in his determination to study Psychology at degree level and eventually a career in clinical psychology. Jordan has also regularly volunteered at his local nursing home and the British Red Cross charity shop. All of this is set against Jordan’s own health issues of hypermobility, yet he is always cheerful and upbeat taking a pragmatic and mature approach to realising his goals.

This year, a Chairman’s Special Award was given in memory of Freja Nicholson, who sadly passed away last year following a battle with cancer. Simon Nicholson, Freja’s Geography teacher, gave a touching tribute and spoke of Freja’s positivity and determination.