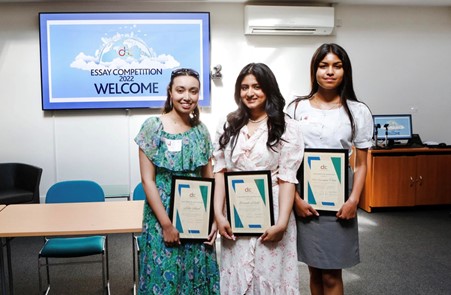 An inspired student from QE has secured first place in a national essay competition. Hannah Malik, who studies A Level Politics, History and Fine Art at QE, has won a cash prize and the opportunity to take part in a work experience placement and mentoring scheme with Doughty Street Chambers, one of the country’s leading barrister firms. She was invited to a special dinner at the London-based organisation where she discovered she had won the prize. Hannah encountered the competition whilst looking for work experience in the fields of human rights and international law. She explains: ‘I’m interested in these areas because I want to help people who are unaware of their rights. In some countries, people don’t get justice because they are not educated about how the law should protect them’.

For the competition, students were tasked with writing a 1500-word response to the question of how international law should be used to achieve justice for people and countries that are most likely to be affected by climate change despite having contributed the least to the emergency. On the difficulty of the question, Hannah says: ‘I didn’t have much knowledge of the topic at first, but I found the research really interesting and enjoyable’. Hannah’s entry was selected from hundreds of others and the quality was so high that, in the end, organisers gave the prize jointly to Hannah and another student. Hannah’s argument in her essay caught the eye of several high-profile judges which included Shadow Foreign Secretary, David Lammy, eminent QCs and international and environment law specialists. ‘I focused on racial and colonial aspects of the climate and how to bring justice to climate refugees and others affected by the emergency,’ she adds.

Asked how she felt about winning the prize, Hannah reveals: ‘I was shocked because I really didn’t think that I would win. I was really happy’. She is now looking forward to enjoying the fruits of her hard work. ‘I’m really excited to work with my mentor at Doughty Street Chambers and gain experiences that I wouldn’t have otherwise had access to’. In addition to taking part in mentoring and work experience, Hannah also split the cash prize of £600. However, she was so impressed with a climate change project focusing on Sundarbans in India that she decided to give her share of the prize directly to the cause.

We will shortly be able to hear Hannah reading her essay on the new QE Politics podcast which will be released within the next few weeks.