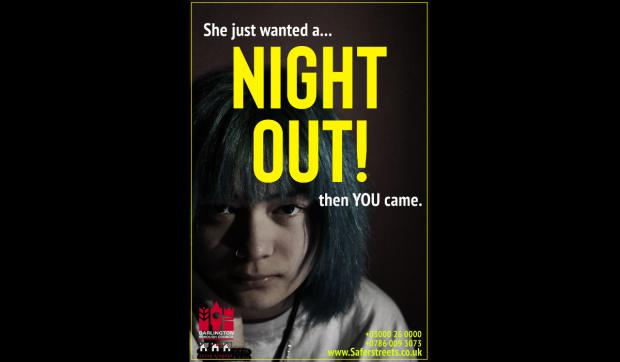 First year Creative Media students from QE have worked closely with Darlington Borough Council on its Safer Streets initiative to help tackle intimidation and violence against women and girls in the town. The students have designed high-impact posters and video campaigns to give a young person’s perspective on how to raise awareness of the problem. Their ideas have proved valuable to the wider campaign work being done by the Council, in partnership with Durham Constabulary and the Durham Police and Crime Commissioner, to educate men and boys, and help everyone feel safer on the streets of Darlington.

Amber Fenwick, who is studying Creative Media, Film Studies and Maths at QE used her own experience of intimidation in her Safer Streets video. “I tried to portray that sense of danger a woman can feel when a man walks too closely behind her, because I’ve certainly felt anxious and intimidated by strangers who have approached me when I’ve been walking alone,” said the 16-year-old from Darlington. “I think it’s really important to get the message across that this kind of behaviour, particularly in the dark, can feel really threatening.” Student Luke Robinson, 17, said he too had experience of female friends falling victim to intimidation and violence. His campaign featured half-lit photographs and key messages to highlight perceived dangers. He said: “It’s been a really interesting project to work on and particularly valuable because we partnered with a ‘real’ client. We received some fantastic feedback and constructive criticism.”

Safer Streets is a UK-wide Government initiative that has seen County Durham and Darlington receive over £1.5m over the last 18 months to make the region safer through a variety of projects. Last year, more than £450,000 was awarded under the Safer Streets 3 Fund to support improvements in Darlington Town Centre that help women and girls feel safer. The money has been used to improve street lighting around bus stops and taxi ranks, deliver training and education programmes, and buy e-bikes for police and council civic enforcement officers to respond to incidents more easily. A proportion of funds was assigned to an expansive communications campaign aimed at men and boys, to focus on the damage caused by intimidating and violent behaviour against females. Andrew Allison, DBC’s Community Resilience Officer, chose to work with QE media students to examine how young people might choose to highlight the issues to their peers. “We found the experience of working with the students really useful and very informative,” he said. “We were able to get the ideas and views of young people, which helps inform our own campaigns, often highlighting our misconceptions of how young people think and what they know. “We would definitely work with the QE again as they were very accommodating and gave us the time to ‘pitch’ our project to the students.”

A number of QE students worked on the project over an eight-week period. Course leader Beccy Vickers said they were tasked with exploring key messages to men and boys who were committing offences, both knowingly and unknowingly. “The students really connected with the project and delivered some powerful and thought-provoking campaigns that hit the brief,” she said. “It’s very beneficial to those looking to forge a career in the media industry to engage with clients and present a body of work to them as part of their A Level learning.” Mike Renton, Darlington Council’s cabinet member for stronger communities, added: “I am delighted that the students enjoyed working on this important project. We are committed to making everyone feel safer in our town and it is great to get the students engaged in these discussions at such a young age because it is they who will carry the lessons learnt long into the future.”