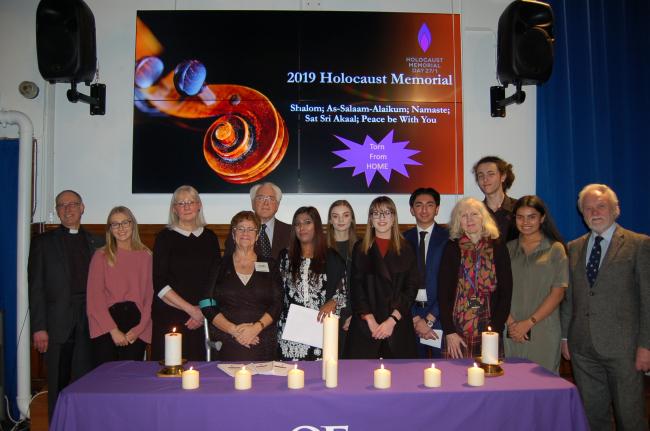 Visiting Auschwitz, Poland, is often described as a mentally challenging, yet hugely significant and eye-opening experience. Four A Level History students from QE were granted the opportunity to travel to this concentration camp and witness first-hand the lasting impact of the Holocaust as part of the Lessons from Auschwitz Project. Upon their return to the United Kingdom, Lucy Jameson, Ami Lavan, Kion Sharma and Eleanor Wright manned a display and spoke to prospective students at Open Evenings about the trip before delivering thoughtful presentations to both their peers and members of the public at the Holocaust Memorial Day event held at the College.

However, keen to extend their knowledge further, they decided to invite a guest speaker into College who possesses his own experiences of the Holocaust and anti-Semitism. Freddy Naftel spent 90 minutes speaking with Modern History students about how his mother and grandparents fled Nazi Germany as refugees whilst his great aunt and uncle both died in Auschwitz. He also explained how he has been the victim of prejudice both at school and whilst working, highlighting contemporary issues of anti-Semitism.

Gary Darby, Course Leader for A Level History at QE comments: ‘Freddy’s presentation was extremely powerful and touched everybody. Listening to somebody who was directly impacted by the Holocaust is very moving and we would like to thank Freddy for visiting the College and sharing his personal experiences with our students’.