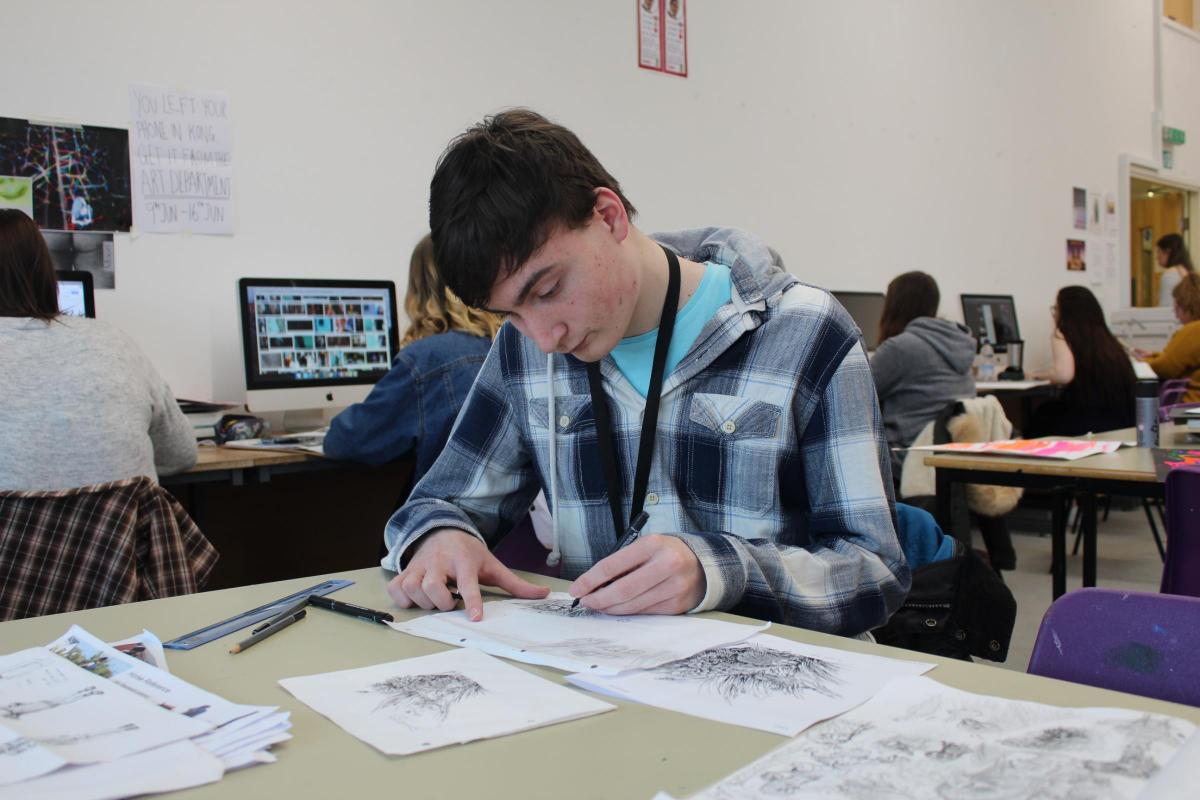 Jonathan Raiseborough, Art Foundation student at QE, has been specially commissioned to illustrate the next book of children’s author Peter Barron.

Jonathan was born with a gift for art and, for as long as he can remember, he has been drawing. Inspired especially by the Roald Dahl books, he wanted to be a children’s illustrator, like Quentin Blake, the artist who created characters such as The Big Friendly Giant, Fantastic Mr Fox, and Matilda. “I just loved the imagination behind the books and how the characters came to life through the pictures,” recalled Jonathan.
His love of drawing continued to grow and, now aged 18, he is busy with a foundation course in art after successfully completing his A levels at QE.

Peter Barron, former editor of the Northern Echo, first met Jonathan a year ago when he compered the Vibe Awards for young people in Darlington. Jonathan’s artistic skills were recognised and the citation mentioned his ambition to be an illustrator for children’s books.

Coincidentally, Peter was looking for an illustrator for his latest book, Snowdrop, The Spikeshuffler at the time. It’s a story inspired by a cutting taken from The Northern Echo, telling how a baby albino hedgehog had been taken to an animal sanctuary amid fears it would be killed by other animals because of its colour. In the book, Snowdrop overcomes prejudice in Merlin’s Meadow and ends up a hero.
After the awards ceremony, Jonathan and Peter had a chat and he sent him the manuscript for the new book. A few weeks later, Jonathan sent back the most beautiful illustrations. His talent was clear to see and Peter immediately knew he had his perfect illustrator.
Around the same time, Peter had been helping the North East Autism Society (NEAS) to publicise an appeal to employers to make more use of the skills of people on the autism spectrum. Jonathan was a case in point and, when the charity’s chief executive, John Phillipson, saw his illustrations, he was also hugely impressed.
The result is that the North East Autism Society has agreed to fund publication of the book as a way of showcasing the talents of autistic people.
“Jonathan is a great example of someone on the autism spectrum who has wonderful, natural ability,” said John. “His ambition is to be a children’s illustrator and it is a joy for us to help make his dream come true and send out a message to employers everywhere to look beyond the label of autism.”
Jonathan’s dad Mark, also a talented artist, added: “I don’t think people realise what an asset autistic people can be and it’s absolutely brilliant that the book is going to be published. Jonathan has worked so hard in life to overcome his challenges and this is the best opportunity he could have been given. We’re just incredibly proud of him.”
Jonathan is putting the final touches to the illustrations and the book is due to be published in the autumn. He will benefit from a full share of the royalties.
“I really identified with the main character, Snowdrop, because people on the autistic spectrum can feel different. They don’t quite fit but don’t understand why,” he said.
“I think the story is very beautiful and I feel so lucky to have the chance to be involved. I just hope the illustrations will reflect that warmth and character and do the book justice.
“It’s a heart-warming story but it has a really powerful message – that it’s wrong to judge someone just because they’re different.”

In Peter’s book, and in our opinion, Jonathan isn’t different. But he’s definitely special with an extraordinary talent.