Students experience the Magic of Kynren 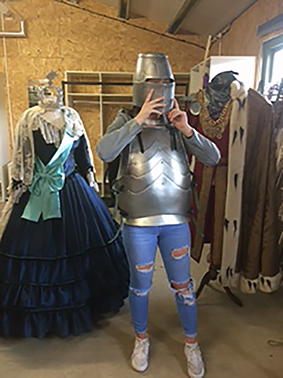 A Level Travel and Tourism students from QE benefitted from a ‘behind the scenes’ tour from staff and volunteers at ‘Kynren’ in Bishop Auckland. ‘Kynren’ took place over the summer and was the largest outdoor show in the UK. It told the story of 2000 years of history of Britain and involved over 1500 cast and crew and many animals including horses, donkeys and even geese!

The students had the opportunity to learn about the organisation and running of such a large scale tourism event which took place on their doorstep. They visited the technical control room and watched how some of the magic was made including a building rising from water and being surrounded by smoke. One of the students’ favourite parts of the tour was meeting some of the horses and being shown how they are trained to be close to fire. The visit to the costumes department was also very popular. The students really enjoyed the visit especially as the ‘Kynren’ staff were so enthusiastic about the whole project.

Student Grace Smith comments, “I loved seeing the animals and getting to go behind the scenes like the controls for lights etc. I have never heard of the show before but now, after going on the tour and learning about it, I would definitely go and pay to watch the show!”

Julie Vickerman, teacher at QE, adds “Visits out of College and connections with local organisations such as Kynren really add to the whole college experience and education of the students.”

Anne-Isabelle Doulon, the CEO of Kynren, is due to come to QE to speak to students about the running of such a large scale event and the impact on the local economy, people and environment.