Home » Latest News » The Best of the Best

The Best of the Best 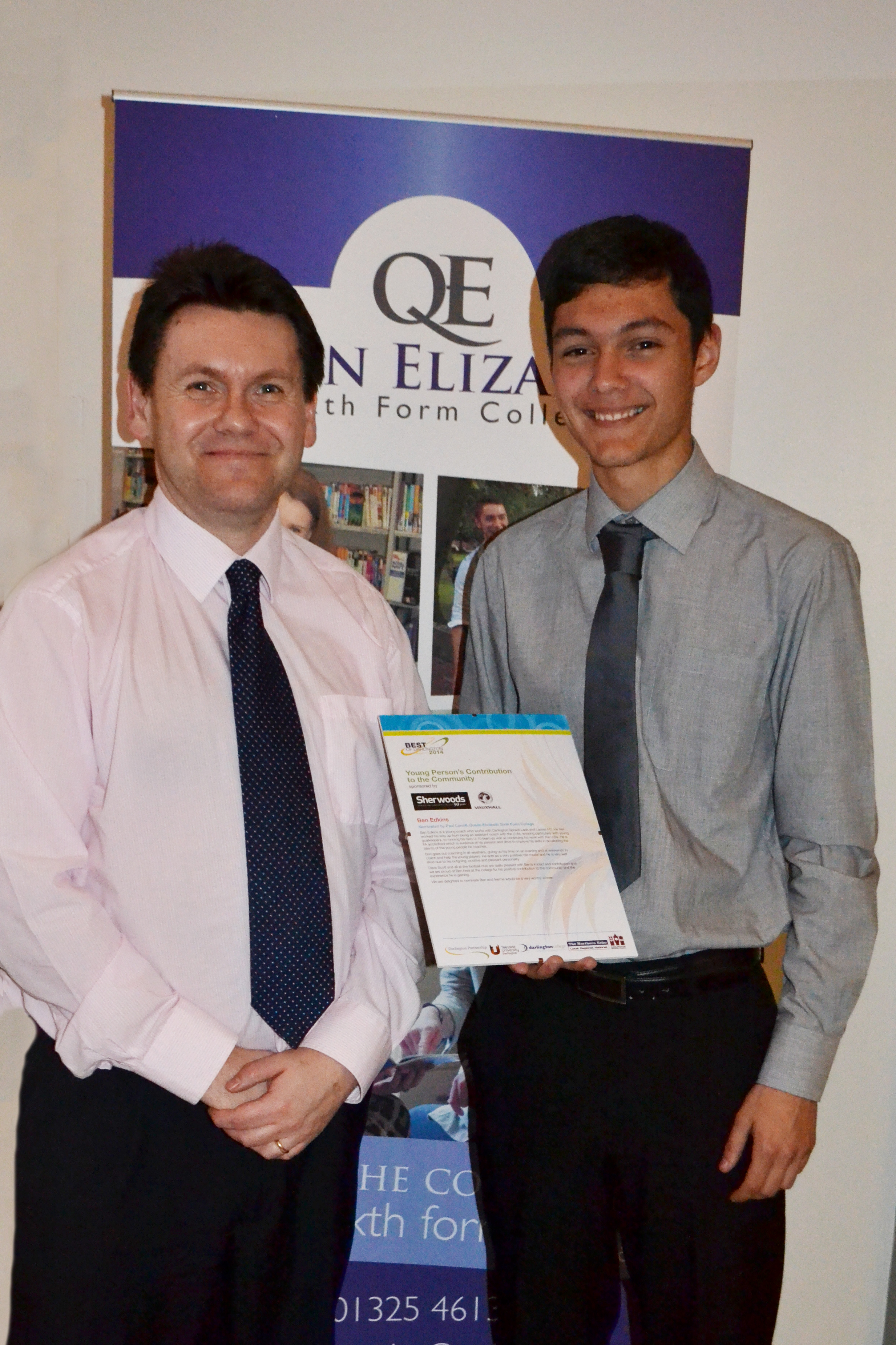 QE enjoyed an extremely successful evening at the prestigious Best of Darlington Awards, with students nominated by the College being shortlisted and winning in a number of categories.

Danny Stevens, who left QE last August, was awarded the coveted “Young Citizen of the Year” for his commitment to volunteering. Danny has been a frequent volunteer at St. Teresa’s Hospice where his contributions, ranging from making and serving food to chatting to patients and visitors, have been highly valued.  To raise money for St.Teresa’s, Danny was sponsored to shave all of his hair off! He maximised publicity to get as much money as possible and, supported and cheered on by fellow students and members of staff at College, the head shave raised over £3000; a tremendous achievement. Danny’s hair was also used by a charity supporting children with cancer. As well as raising money, Danny’s act also raised the profile of volunteering and inspired many others to commit their time and energies to community projects. Danny also regularly volunteered at the Education Centre for Children with Down Syndrome, helping to develop their social skills and educational progress. Again, his help was greatly appreciated by all who came into contact with him. An unfailingly positive and cheerful person, Danny champions volunteering and modestly says, “I gain so much personally from volunteering, receiving more than I give.” Currently studying medicine at university, Danny is committed to helping improve the lives of others.

The deserving winner of the “Young Person’s Contribution to the Community” category was QE’s Student Sports Management Team. The Team makes a massive contribution to the development of sport in College and the community, including in local schools. To celebrate their achievements and to share their work with other colleges across the country, members of the Team were asked to speak at the British Colleges Sport/England Colleges Football Association National Quality Framework Conference at St George’s Park. They spoke about Sports Leadership at QE and how we are a leading pioneer in Sports Leadership for our students. The students were commended by all for their excellent work and how it is helping them to develop and excel as young people. Ben Edkins, another student at QE, was also shortlisted for his work as a young football coach.

The “Academic Excellence” category also saw all three shortlisted nominees coming from QE. The winner of this award was Dominic Birch who left QE last summer. Dominic is an exceptionally gifted student and his academic excellence is clearly demonstrated by his achievement of 5 A* grades in his A Levels; a truly outstanding performance which makes him one of the most qualified young people in the country. Dominic is currently an undergraduate on Durham University’s highly competitive and prestigious History and English degree course. The other two nominees were Tom Wilson who is studying Social and Political Science at Cambridge University, and Erin Watson who achieved exceptionally high A grades in all of her AS Levels.

QE also provided all 3 of the finalists in the “Exceptional Student” category. Fred Millman was the winner for, although being profoundly deaf, he is predicted to achieve 4 A grades in his A Levels. Amy Weatherburn and Kiera Prior were also deservedly honoured for overcoming personal difficulties.

Assistant Principal Laurence Job comments, “We are extremely proud of all of the students who were shortlisted at the Best of Darlington Awards – they are talented, hardworking and caring young people who deserve to be recognised in this way.”