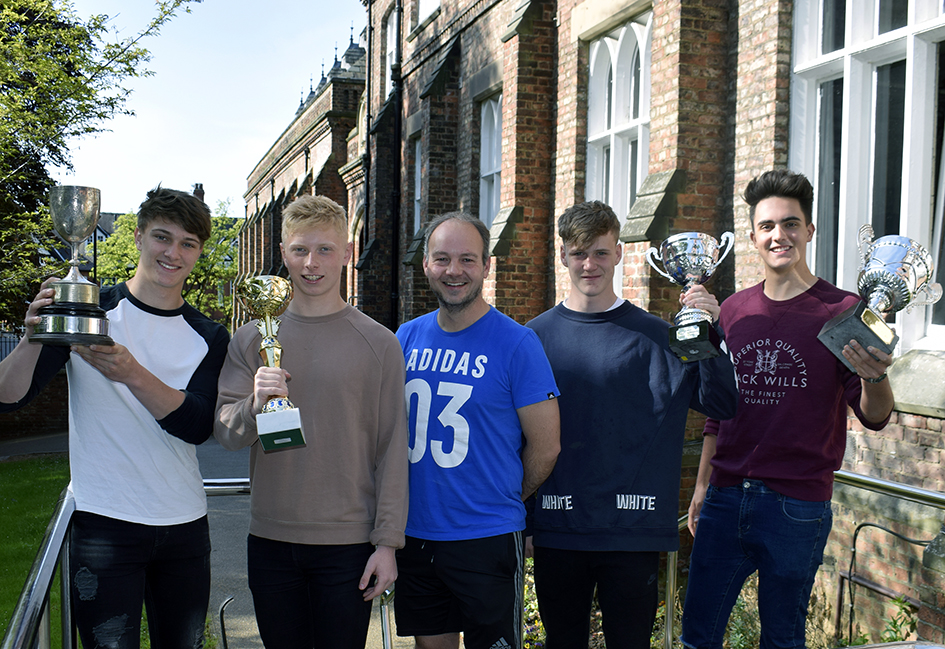 Celebrations were in full swing for QE at the conclusion of the 2017-18 football season after the men’s first team were crowned triple champions. To begin, the team secured first place in the North East Colleges’ Championship Division, winning nine of their ten games, before defeating Stockton Riverside College to win the North East Colleges’ League Cup. They then travelled to New Ferens Park, Durham, to compete in the Albert Knox Cup (The Durham County Schools’ Football Association Cup) against New College Durham, who were also celebrating a very successful season having won the North East Colleges’ Premier League. However, four goals from Jamie O’Brien and a fifth from Sam Ions secured the victory and trophy for QESFC, rounding off an incredible season of football for the College. In addition to this, the men’s third team won the North East Colleges’ Development League, defeating Darlington College’s third squad in their final game of the league.

Andy Grant, who coached the men’s first team during their historic season, comments: ‘The lads are a terrific group of footballers who have been an absolute pleasure to coach. However, more importantly, they are a terrific group of young men who have been a credit to the College and themselves throughout the season. I am incredibly proud of them’. Kellie Pomeroy, Sports Development Co-Ordinator at QE adds: ‘What a fantastic football season it has been for the College, I believe that the success achieved by our men’s first team is a first for the region. Well done to both the team and Andy’.