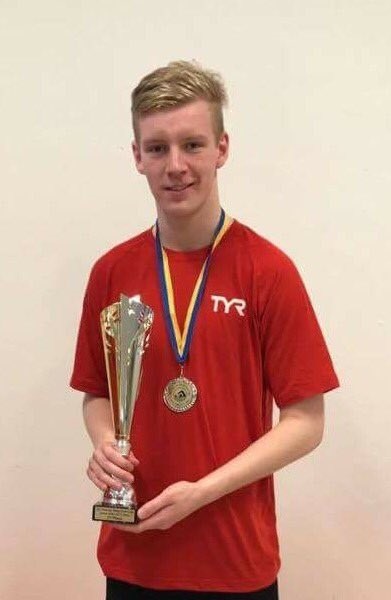 Michael Cousins from QE has recently enjoyed both national and international success in water polo championships. Earlier this month, he was part of the silver medal winning England U17 2000 Men’s team who travelled to Brno, Czech Republic, to participate in the EU Nations Cup. The team, made up of thirteen players, defeated Scotland, Denmark, the Czech Republic and Switzerland to reach the final where they narrowly missed out on a gold medal when they faced South Africa in a dramatic final match, losing 8-6. Throughout the tournament, Michael made his presence felt by scoring several goals to help his team reach the final and the players were spurred on by the many supporters who had travelled to Brno to watch them play.

Closer to home, Michael’s local team, Sedgefield won the U19 Boys National Water Polo title after defeating defending champions Exeter in a dramatic penalty shootout on Sunday 23rd April. With 57 seconds remaining and Sedgefield losing by a point, Michael scored a literal last minute equaliser and sent the game to a penalty shootout where the team won with a final score of 12-10. This win follows the team’s victory in the U17 Boys National Water Polo title last year.

Michael, who has been playing water polo since the age of 7, comments “I am really proud of my recent achievements and I am thankful for QE’s support of my sport. I have recently been selected for the U17 GB men’s team to play at the Junior European qualifiers in Manchester and I hope to push on and carry my success into the future at senior level.”

At QE, Michael studies Maths, Economics and Modern History and aspires to work in banking and the finance industry. Vice Principal, Laurence Job, comments: “We are extremely proud of Michael’s achievements, and look forward to hearing about his future accomplishments. We wish Michael every success for the future, both academically and in the world of water polo.”