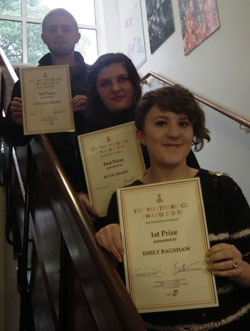 The German Department has announced the winners of the British – German Association’s Youthbridge Awards for 2012. First prize of £50 goes to Emily Bagshaw, second prize of £30 goes to Ruth Smart and third prize of £20 goes to Callum Scott. All students also receive a Youthbridge Award Certificate.

Youthbridge is a charitable initiative of the British-German Association which aims to provide support for making German learning in English schools more relevant, interesting and fun. The Awards are presented annually to three students of each participating Youthbridge School who are chosen for their enthusiasm for and ability in the German language as well as their ability to motivate others to take up German and develop an interest in Germany. They also have to complete a project explaining in German their interest in Germany, its culture and language.

“I was delighted to receive the Youthbridge Award. German is my favourite subject and it’s nice to be acknowledged for something I am so passionate about. Learning German is very important, especially as German is the most sought-after language nowadays and Germany is the third largest economy in the World. German opens up so many doors and opportunities. I want to study German and French at university and then work in Germany. I am going to Germany in the summer and that’s where I will spend my £50!”

Ruth Smart adds:
“I was extremely surprised to be nominated for the award and naturally extremely pleased and proud that my work in German had been noticed. I was also grateful to receive the money which I will spend in Germany over the summer. I would like to study German with another subject at University and later on I intend to live and work in Germany or Austria.”

Callum Scott, who hopes to study Medicine with European Studies at University, comments further:
“I was surprised but very happy to win a Youthbridge Award. Youthbridge Awards are a great way of encouraging young people in this country to get involved with German and make the language accessible to all. As part of my university studies I will spend a year working in a hospital in Germany. I am going to use the money that I have won to help fund a trip to Africa in 2013.”